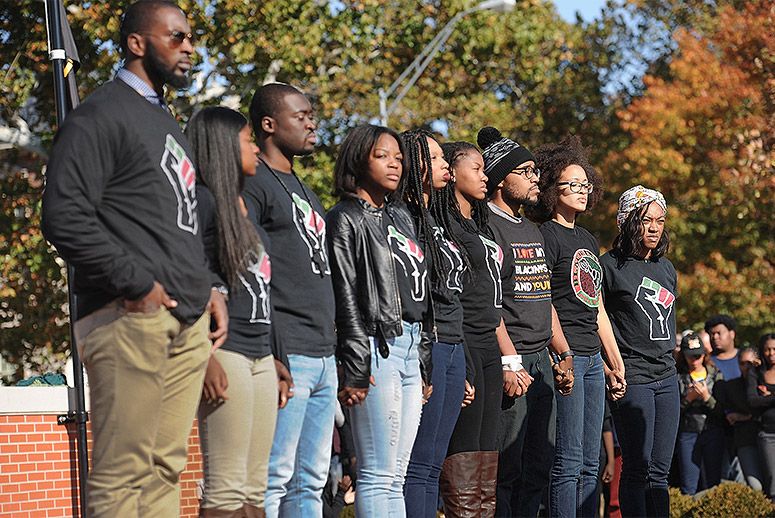 Students celebrate the resignation of University of Missouri System President Tim Wolfe amid allegations of racism. Photo courtesy of Michael B. Thomas/Getty Images.

The presence of elitism, capitalism, racism, and sexism are still ubiquitous within the apparatus of higher education. Higher education leaders need to move beyond rhetoric involving diversity, equity, and justice. In their quest for absolution, these sentiments have increasingly become cliché and disingenuous. We needn’t look further than the now ever-present but trite Black Lives Matter solidarity PSA’s from nearly every institution as a clear example. PWI’s and HBCU’s alike rushed to the keyboard to let their student body know that they do not condone the state sanctioned violence against Black folx that the world witnessed (yet again). They do so now as if they have not seen anything like this before. They do so now as if they have not historically and continually harmed Black people on college campuses. They do so now as if they do not have statues and buildings named after white supremacists. Admittedly, some of these messages were well done, albeit ostensible, while others absurdly informed their students that “All Lives Matter.”

Irrespective of the messaging, institutions of higher education are simply not doing what is necessary to dismantle systems of oppression within the context of education.

Radical Black Feminist and Antiracist leadership policies as well as practices in institutions of higher education have always been desperately needed yet have never existed the way it should. Abolitionist educational practices to facilitate moving beyond talking points and toward authentic equity and justice is critical but unfortunately absent. Educational leaders must push to drastically change whitewashed curriculum requirements, harmful policy that targets our most vulnerable populations, and practices that are undoubtedly contemptible.

Students have always been required to take general education courses in the fields of English, Math, History, Science etc. However, for too many institutions, Women, Gender & Sexuality as well as Black Studies courses are scarce and only offered as electives. This must change across the board. Too often colleges will have a diversity requirement for general education, but students are able to take a Western Civilization course instead of Black or Women’s studies. The fight for the necessity of Black studies to simply be offered at colleges nationwide have an extensive history. The first Black studies department to exist was implemented in 1968 at San Francisco State following an inclusive student body strike. Since then, many Black studies departments struggle to maintain due to lack of funding and support by their institutions. Two years later in 1970, the first Women’s studies program was founded at San Diego State following the collective advocacy efforts of students within the Women’s Liberation Group on campus. Black studies and Women’s studies needed to have movements 50 years ago to simply exist and have not been deemed essential requirements for students to this day.

Many college students can complete undergraduate and graduate degrees without taking a single course on Feminism and Black Studies, this is detrimental to our collective future as a society. To be ignorant and educated may seem oxymoronic, but of course it is not. Students must leave college having been exposed to accurate pedagogy surrounding these subjects. If not, we will assist in maintaining a society where adults will harm Black people by maintaining white supremacist thought and practice. These students will go on to become legislators, lawyers, doctors, teachers etc. Colleges and universities have always been complicit in preserving the status quo of our unjust society and will continue to be if they do not take a radical approach to change.

It cannot be overstated that the abolition of campus police is imperative. The university I currently work for and attended as a student, is in a small town with a relatively small student body of under 10,000. The local police station as well as a Massachusetts state police barrack are both within 5 minutes of the campus. Yet, we still have a campus police department. This is far too common and not merely anecdotal. There is no need for this amount of police to be so close in proximity in a small area. The amount of times police are called on Black students and staff for merely occupying space on college campuses nationwide is horrifying. Black people do not feel safe when in the presence of police and rightly so.

Black women are disproportionately at risk for sexual violence and have never received adequate protection. No amount of police will ever prevent this from being relevant. Black women continue to be vulnerable to sexual violence on campuses, largely due to patriarchy and misogynoir. Our institutions have proven to continually treat Black girls and women as unworthy of protection. Black women including those with disabilities, trans Black women, as well as queer, lesbian, and bisexual Black women are vulnerable to a multitude of unjust treatment. To say they need protection put in place is an understatement. It is urgent and long overdue. Campuses must divest from law enforcement and invest in alternatives including prevention programs, mental health professionals, and counselors who can utilize survivor centered transformative justice.

Cost of attendance has risen at alarming rates, which have disproportionately impacted Black students. 86.6% of Black students borrow federal loans to attend four-year colleges, compared to 59.9% of white students. While the blame is not solely on colleges and universities, they are undoubtedly complicit. Too many college administrators do not leverage their positions of power to, at the very least, advocate and push for policy that will support Black student and staff needs. Diverse campuses are more attractive to all students and staff; thus, institutions use Black students to show off in brochures under the guise of inclusivity on predominantly white campuses. Too often, they only provide a level of access but do not provide affordability, adequate resources, fair treatment, safe spaces, and a sense of belonging. Too often they overlook Black faculty and staff regarding hiring, promotions, and salary equity. Gumption and grit are characteristics that Black people are expected to weaponize to defeat all societal injustices stacked against us. This is not fair nor plausible. Black folk are integral yet treated as disposable. The onus of educating white people on how to act should not be on Black folk. College administrators must do more than purchase “White Fragility” to have on display in Zoom meetings. They must begin seriously addressing systemic policies and practices that are detrimental to Black lives on campuses. Otherwise, they are merely pretending to be a catalyst for societal change with their solidarity statements, while simultaneously being antithetical to indispensable transformation.

James A. Perry Jr. is an educator from New Bedford, Massachusetts. He holds a B.S in Human Services and a MPP in Education Policy. He is passionate about social justice issues specific to race, class, and gender. He was a guest panelist on The Grapevine “White People Cheating: The College Edition” episode.