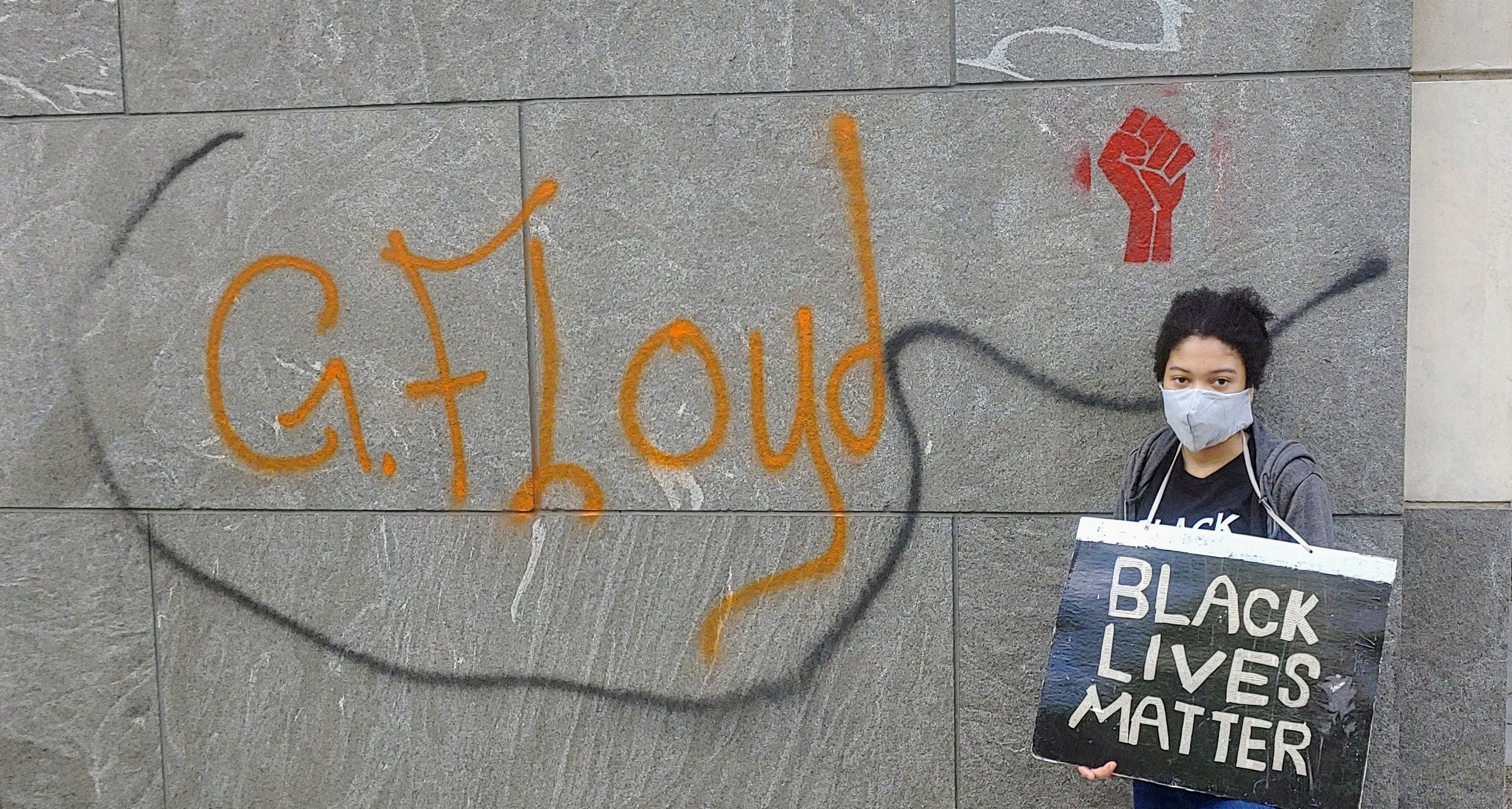 10 days ago, I climbed up the Robert E. Lee Statue at a protest in Richmond, Virginia – the former capital of the Confederacy – and I was asked to speak in front of a large crowd of protestors. This was unplanned, and I have been grieving so heavily these past few weeks and I had no idea what to speak about. I began by reading an excerpt from Dr. Martin Luther King’s “Letter From a Birmingham Jail” (the part where he said that he is “gravely disappointed with the white moderate”). Then, I delivered a brief, extemporaneous speech about the growth of these white liberal’s co-optation of anti-racism, and Black grief.

Are these so-called “well-intentioned” white liberals finding themselves just now speaking up about racism? Or, do they find often themselves solely speaking up after police murders? I am livid about the eerie silence and deadly complacency of these so-called “well-intentioned” white liberals in light of the recent police murders of Black life. White liberals must extend their solidarity beyond changing their profile picture or attending protests for a photo op. To follow up from my previous article, “6 Ways I Have Faced Anti-Blackness From White Liberals,” let’s unpack the recent growth of co-optation of the fight for Black lives.

The Show Must Be Paused was originally created by two Black women named Jamila Thomas and Briana Agyemeng. On their website, they stated,

“Tuesday, June 2nd is meant to intentionally disrupt the work week. Monday suggests a long weekend and we can’t wait until Friday for change. It is a day to take a beat for an honest, reflective and productive conversation about what actions we need to collectively take to support the Black community.”

The day before the protest at the Lee Statue – Tuesday, June 2 – The Show Must Be Paused and its mission was co-opted and called, “Blackout Tuesday.” Tens of millions of Instagram users, many of which are comprised of white people and non-Black people of color, posted a black square on their profiles “in solidarity with the Black community.” A few of these users were so-called “well-intentioned” white liberals that I previously knew. Quite a few of them unfriended, unfollowed and blocked me from their social media pages for speaking out and taking action against anti-Black racism, years prior to the current uprisings in defense of Black life. Many of the white liberals I knew who participated in so-called “Blackout Tuesday” have suppressed my voice as a Black woman by labeling me with stereotypes rooted in misogynoir. Those who have been apathetic towards the long fight for Black lives seemingly remained silent until recently, when being “down” for Black lives was seen as a trend. These were also white liberals who have silenced me and told me to my face that what I do “isn’t real activism,” while being praised for co-opting experiences that they don’t carry and movements that aren’t about them. I am especially infuriated with the fact that white liberals are co-opting anti-racism in a way that is self-serving, and garners the support that Black women need, and Black women who experience first-hand what the so-called “well-intentioned” white liberals do to us behind closed doors.

Instead of actively disrupting the systems that allow Black people to be murdered by the state, white liberals disrupt our grief, by tokenizing Black women, and demanding that we “educate them.” On top of white liberals using me as an accessory so they can feel good about themselves for “including a Black girl,” white liberals insulted my intelligence by assuring me that they don’t need to put in anymore effort than they already have to be anti-racist. Those who have done so have been disingenuous to the resources that are available to them in plain sight. More often than ever, I’ve personally been asked to do intellectual and emotional labor for stuff that white liberals can search on Google. When white liberals who depend on every Black woman they come across to “educate” them how to not oppress us, they show that they view individual Black women as a spokesperson for our race. Black women are not “teachable moments,” and we especially deserve so much better than being used as self-serving accessories for organizations to appear “more diverse,” and for the white liberals who those organizations to feel as though they are “the exception.”

While the police continue to stereotype, criminalize and incarcerate, and murder us, for speaking out and taking action against anti-Black racism, white liberals are being praised for mimicking ideas that they have stolen from Black women. While white liberals have used our trauma, our creativity, our bodies to make their businesses, corporations, and their organizations appear “more diverse” as a means to gain capital, they accuse us of “attacking” them when we challenge their intentions. When we identify the very little respect, these so-called “well-intentioned” white liberals have for Black women, specifically through the ways they have appropriated our language and our ideas, they silence us. When the press, their followers on Facebook and Instagram aren’t watching, they label us as “jealous,” “shady,” “angry,” and “aggressive.” I noticed that many spend far more time centering their own concerns about being ostracized by co-workers, classmates and family members who outwardly hate us, and less time putting them in check.

White liberals have co-opted anti-racism in a way that is palatable and self-serving, which is an obstacle to our liberation. Despite white liberals’ certainty that they are somehow “the exception,” basing it on their claims that they “have Black friends” and “vote blue,” we should not give them the agency to shut down our callings to act on their claims that they practice anti-racism. White liberals patting themselves on the back for saying “racism is wrong,” and thinking to themselves, “that’s enough activism for today” after posting a Black square will not deter us from fighting for our liberation.

The questions white liberals should be asking themselves and each other is,

“What does your solidarity look like beyond posting a Black square?”

“Are you willing to practice anti-racism by showing up for Black lives and holding yourself and other white people accountable?”

“How are you going to accomplice yourselves with the fight for Black liberation?”

White liberals should spend less time in Black folks’ business, and occupying our spaces to claim that they’re “anti-racist allies,” while policing the way we exercise our right to dissent; and more time applying anti-racism to their lives, by putting themselves and other white people in check for perpetuating anti-Black racism, regardless of their intentions; And that’s the bare minimum.

Stephanie Younger is an 18-year-old based in Richmond, Virginia, whose work centers the intersections Black feminism and womanism have with prison and police abolition. In 2017, she created Black Feminist Collective.

One thought on “The Fight For Black Lives will not be Palatable: On Co-Optation of Anti-Racism”