An Excerpt from the E-Book, “The Therapeutic Alliance Handbook” 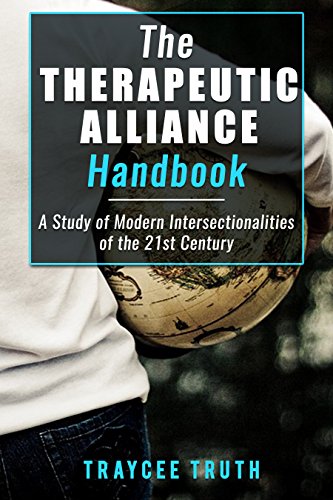 The following excerpt is the first chapter of Traycee Truth’s e-book, The Therapeutic Alliance Handbook.

Usually, it is customary to begin an essay/journal of this sort of measure with a precise definition regarding whiteness, yet what are the intersectionalities of this concept? Within most contemporary and progressive circles, it is assumed that the cultural group I belong to should be able to determine itself, right? However, whiteness has been historically characterized by non-whites, looking to voice the actions of social inequalities and injustices within North American cultural understandings. A working example of this concept is the author James Weldon Johnson, an African American historical poet, and anthologist who observed in the year 1912 that there is more than meets the eye of social “isms. “The colored people of this country know and understand the intersectionality’s of white people themselves; the white people will ever know and understand their intersectionality’s themselves and how it affects people of color.”

I currently live in Toronto, Ontario, Canada. My social location can be identified as a young adult female who is 1st generation Caribbean-Canadian. I am a single mother of two children, one biological and the other child is my niece that I cared for since the age of three months old. Thus, when reviewing this topic of ageism and adultism retrospectively, I paused and then became upset by the complexities of my social identity. Mainly, because of this subject I target my insecurities as a person and a professional social worker. Upon looking at me, you would never know that my life has had various levels of personal and professional complexities. However, these challenges have made me realize that there are many layers to society’s labels, especially being an international student. For instance, understanding that I have inherited stereotypes based on historical analyses are within my social location and identity. Within the century, various Caucasian scholarly writers have embarked and tried to embrace the study of whiteness and its intersectionalities of cultural ageism and adultism.

Within the century, various Caucasian scholarly writers have embarked and tried to embrace the study of whiteness and its intersectionality’s of cultural ageism and adultism. However, it has been individuals of color, in particular, African/Caribbean ethnic scholarly writers continue to sign of progress and make significant strides regarding community contributions towards the efforts of systematic change. Thus, there are several different components regarding whiteness and its effects on cultural adultism and ageism; this includes such areas as 1) racial identity, 2) racial bias, and 3) ethnic privilege. Hence, any restriction or exploitation regarding people of color is mainly because of one is assumed age, as opposed to one’s ability, capability, comprehension, or working capacities may be expressed as for being adultism. Such biases and professional restrictions can often attribute to one’s privilege within the socio-cultural of being Caucasian. Thus, believing that one’s “better judgment,” the “wisdom of age,” or other age-related euphemism has afforded them to make ethical and long-term choices regarding adults because of their place of privilege and age in North American society.

The Causes of Cultural Adultism are biased towards adults who have uplifted themselves from the “isms” embedded throughout North American culture/society. The collections of social biases towards adults of color can happen based on an assortment of critical experiences and issues. The areas that I have experienced the most hardships are due to personal and professional employment preferences since being in employed both the Educational System of Ontario and the Social Sciences and Support Sectors. Time of advancement, or expression of formative opinions/ ideas, a difference in knowledge/understanding regarding concepts/theories/fundamentals, and also a difference in personal/professional beliefs, abilities, and of course culture attitudes/traits. Thus, the social discord of whiteness is highly pervasive in North American society and is embedded within the lining of its culture. However, it can be difficult to digest the factors of “white” privilege and power and the many ways it secures individuals within their racial group within the actions of social dominance. The notion of dominance through the social discord of “white power” in North American society has open the social debate of racism versus dominance and privilege versus marginalization.

The cultural concepts mentioned above have contributed to the social dominance of maintaining the order of “white” dominance throughout the constructs of social order. Thus, racism affects all people of color by definition of “white is right” and any person(s) outside of this regard would go against the actualization of actual cognitive belief systems held by the members of “white” social dominant culture. For instance, discrimination against African-American people dates back as far as the 1850s; where the premise of segregation was established among Caucasian people and African-American individuals. For example, border patrollers were perpetrators of multiracial discriminators within this historical era. Thus, the other ethnic groups must understand and abide by the accordance of the superiority conditioned through white dominance over any other inferior group. The understanding of white dominance suggests unspoken mental and physical restraint over any individual/group of color due to one’s race which, then leads to the in- depth perception of dominant racialized ideologies embedded and streamed through North American Society. Empowering clients and one’s family members, can lead to the development of adequate self- sufficient community resources. Indirectly, clients and their families can build upon a united goal of health recovery within their communities. I am actively aware that I do not have all the answers and solutions to any of the problems that may arise within my clients’ lives. I have personally felt as though; I made a difference in most of my clients’ lives by being highly transparent in complex situations. I am honest about each of my clients’ particular life situations, and I lay down the facts of their problems.

The “distress pattern” established by the firm, rigid, irrational behaviors regarding whiteness is unlike any other of “isms” discussed above because of its abilities to monopolize the conditions and situations that affect people of color the most in their everyday lives. Personal and professional, having gone through vast experiences of embedded oppression, I try my best not to reenact my hardships and critical experiences on others, especially my clients who are youths and young adults. An example of racism through the critical lens of cultural adultism can be defined as tremendous pain experienced by rejection through the course of one’s education and the course of professional development.

These negative attitudes and associations of cultural attributes regarding adults of color are held in disregard by Caucasian people who are in positions of power and considered not to be adult worthy because of the undisputed “rightness of whiteness” which has been entrenched within every ingrained factor in a person of color personal and professional life. The factors of privilege and authority retained within the political discord are supposedly adults because of this, the North American conception of cultural adultism is adultism at work. Thus, anyone who holds a position of privilege and uses their power within a professional workspace has the negative capability to condone and abuse inherently adultist on people without power. Therefore, North American adultist attitudes are primarily demonstrated as actions, policies, rules, and professional discords of discrimination against people of color. Thus, these negative attributes come across within provincial/federal, national/state, and local policies and laws which then factor into areas of educational norms, health directives regarding nutritional information and of course social policies.

Each of the regions of the areas mentioned above then trickles into customs of family norms; religious and spiritual beliefs/traditions. Everything from the areas of compulsory education then affects and negates the abilities of people of color as passive and ineffective which is then reflected in the boundaries of cultural adultism. Hence, by seeking to break down the areas of “Whiteness as Group Identity,” the political discord model then conceptualizes areas where political whiteness rules and holds authority regarding many different racial identities and their areas of strength. Thus, this understanding of Whiteness as Group Identity,” the political discord model can determine four factors of social injustices such as people of color group sizes, the ability for groups to gain and hold power, overall group discrimination in the personal, professional, and political realm. According to the factors within this model, individuals who are part of a lesser minority group undisputedly will hold less power relative to Caucasian people who maintain and control elements of whiteness within North American culture. Thus, experiences of more racialized issues of discrimination will be more familiar and less resembles the areas of progress held by the majority group. Hence, as ethical, social workers should have a greater sense of racial identities, while those individuals who are part of the ethnic majority and use all its privileges and points of access within. The neutrality of the group identity model, some 21st-century writers and activists have willingly equated the negativities of whiteness with a racist ideology. The current argument of some 21st-century writers and activists is that North American society is characterized by an embedded racial hierarchy that values whiteness above people of color. For instance, Caucasians are socialized by influences of family, peers, media into messages of indifference which they internalize as established messages/words of white superiority, even if one may consciously reject racist beliefs systems. I do remember acting on the feelings of internalized adultism and feeling less than my professional counterparts. However, I do also remember resisting and refusing to act upon my need to retaliate because of my personal and home life responsibilities to my dependents. Thus, as a holistic social worker, I must examine and question areas of concerns regarding cultural adultism. Efficiently challenging the administrative regions in cultural adultism, we as a body of professionals and a unity of people need to examine the normalization and legitimization of historical, cultural, institutional and interpersonal dynamics that routinely take disadvantage of youths, young adults, and elders of color.

The Meaning of Whiteness | Psychology Today, 2017, accessed on November 1, 2017, https://www.psychologytoday.com/blog/between-the-lines/201112/the-meaning-whiteness

TrayCee Truth is a holistic civil servant, who holds a degree in social work and is currently working towards her master’s degree in advanced clinical social work. She has had vital and progressive roles in areas such as provincial policy and assessment divisions, mental health court diversion programs, youth probation, child-welfare, public and private education systems along with efforts in advocacy rights for all genders.