What You Need: My Experience Being Dismissed by my Doctor 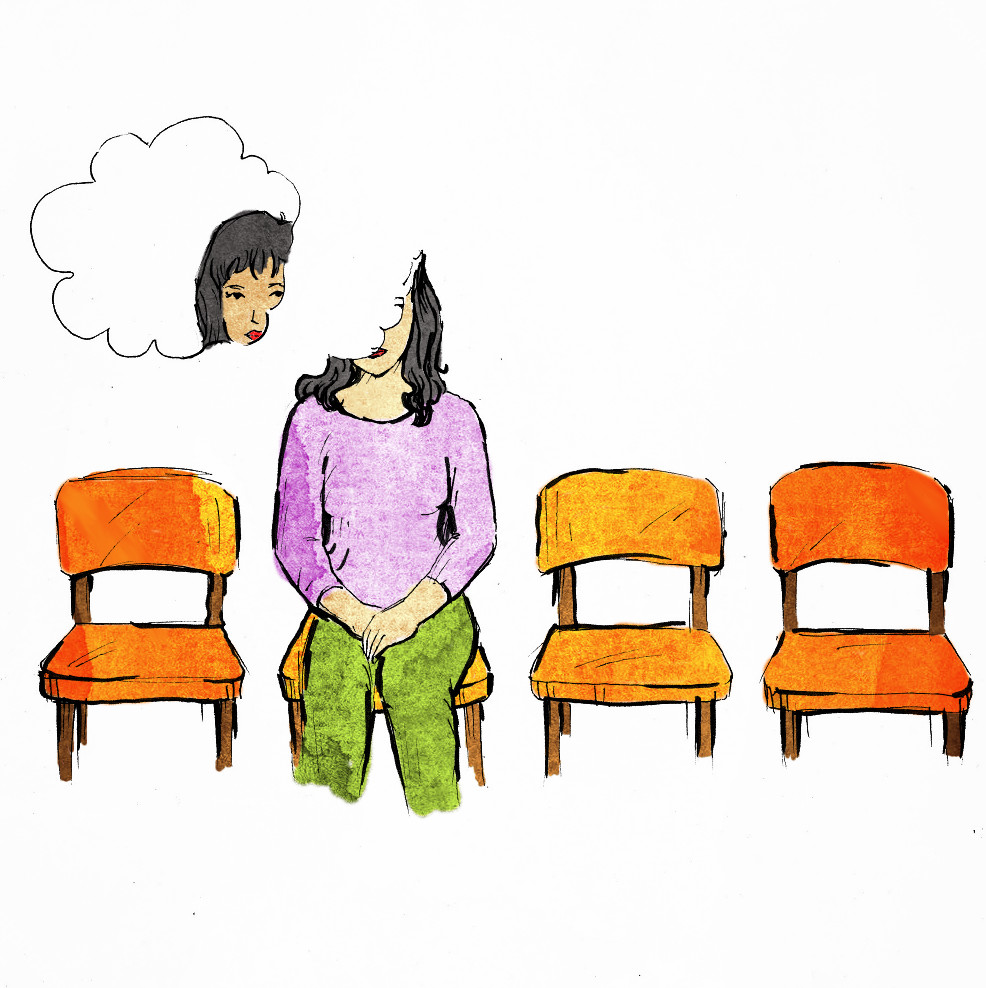 Life just keeps getting better and better for me. I have been afflicted with inexplicable symptoms and anxiety surrounding them for the past decade—all of which were either downplayed or dismissed by my MD, an upper-middle class white man generations removed from mine, despite a CT scan that showed “basal ganglial calcification.” That doctor and a subsequent referral his choice of neurologist claimed this was normal because apparently, “everybody” has some basal ganglial calcification. This same MD was keen to prescribe me a depo shot to alleviate my profusely painful menstrual cramps which, after administered, instead led me to menstruate for two months straight.

That was back when I was in high school. Now, I’m in grad school along with my same symptoms, some of which have increased in intensity. These symptoms are—and have always included—depression, depersonalization, paranoia, hallucinations, joint pain, imbalance, and a delayed procession and response to instructions. Symptoms which emerged later were blackouts and seizures, the latter of which occurred for the first time last summer when my mother found me face down and unresponsive.

And, my MD kept saying it was probably “stress” related. I was a perfectionist intent on aces and a millennial engrossed in my smartphone. I was also a Black, Indigenous woman of few words and fewer friends. My MD obviously knew this, which is likely why he was so quick to dismiss my concerns and never amenable to negotiate their severity or overall symptomology.

The whole time, I kept thinking there was something wrong anyway. I didn’t know why I felt like that or why I experienced those things. Maybe in and of themselves, by themselves, those symptoms could be “normal,” but not altogether; and certainly, not over an indefinite period of time. Something in me knew none of it was “normal.” Despite the number of counselors and intermittent albeit frequent ER visits I had seen, my MD nonetheless met my persistent concerns with skepticism, if he ever dignified them at all. Whatever medical record I had cultivated which spanned years was somehow something he refused to dignify, let alone acknowledge as relevant. I still don’t know why he discounted, and continues to ignore, what were evidenced to be viable concerns.

After what I would discover, I have no idea how he can continue to practice in good conscience. Last winter, I finally received some closure once I relayed my concerns to my campus clinic whom gave me a referral to see another neurologist. He was very nice. My symptoms along with the inflexibility and imbalance I demonstrated during a physical exam prompted him to critically consider my CT scan, which then led to a referral for an MRI.

I’ll never forget how conflicted I felt when he said “basal ganglial calcification” isn’t “normal.” On one hand, I felt relieved and vindicated. My concerns were valid: I was right to worry; I wasn’t overthinking things. The other side of the coin saw my heart drop, because I didn’t want to be right. Even though my MD kept [incorrectly and indifferently] swearing it, I really wanted to be “normal.” I knew I was right, but I didn’t want something to be wrong.

Unfortunately, my story is one of privilege. I’m currently a grad school student, Cis, and able-bodied. I’m also light-skinned which moderates the extent to which I am “Other-ed” or racialized. Being a Canadian citizen also enables me to have accessible healthcare which is free provided I get referrals, even if I’m wait-listed. These characteristics are not the sum of who I am, but they have unduly affirmed my agency and mobility within overarching systems of eurocentrism, colonialism, and colorism. My marginalization is manifest through my lower class, multiracialism, womanhood, and [currently] invisible illnesses wherein I fare against classism, elitism, racism, and sexism: particularly rape culture and misogynoir. I say this to discern that there are ways wherein I systemically thrive, just as I falter. My fears and faults are the result of and in accordance to institutional status quos: prescriptions of patriarchy, whiteness, ableism, and respectability politics.

The privileges I have allowed me to sublimate those fears and faults into scholarship, which then afforded me access to a concerned campus clinic and a consequential referral to a neurologist. What most would read as my perfectionism and productivity were actually a parlance of pessimism and paranoia underlain with a sense of urgency and uncertainty. I did things because I worried I wouldn’t get the chance to. I feared my symptoms would progress, and they did; but I specifically feared that my symptoms would lead me to waste away. So, I was intent to do as much as I could, whatever I could with what little time I could fathom.

Claw-like, natural nails along with an androgynous, amorphous black and grunge wardrobe have marked my style; while cold, concise conveyance has marked my edifice. These mark me as an anomaly and adversity to most, perhaps including my MD, as they demarcate a denunciation of the decorous, devout docility ascribed as propriety and femininity. Oppressive, exclusive systems that allocate privilege through positionality think that people like me should be punished for their dissent and discretion. Punished or killed off, however inadvertently; which explains the prevalence and problematic nature of the adage: “Doctor’s orders.”

Because, what happens when your doctor regards you less of a patient than a nuisance or antithesis to their sense of sensibility or supremacy?

Earlier this fall, my new neurologist referred me to a geneticist. The span between our first appointment and the MRI saw him order blood work to ponder some prognosis as he proposed I could have one of two rare neurodegenerative diseases. One concerned copper while the other involved iron, he said. My MD was forwarded this paperwork and bloodwork, and he conceded showed I have abnormally low amounts of vitamin D; which was common amongst patients with the latter disease my neurologist suspected, the one connected to iron. The geneticist gave me a similar physical like the neurologist had, which again showed I was stiff and oddly uncoordinated. Seizures amongst other “abnormalities” were uncovered further in my family history, multiple generations ago. Along with an iron deficiency I’ve had ever since I started seeing my MD—for which he had even recommended dietary supplements—this affirmed that I had Fahr’s.

Fahr’s isn’t “normal.” The disease also takes form in different things to different people. Even though what I found out was actually called “idiopathic basal ganglial calcification” is symptomatic and visible on CT scans, Fahr’s can’t be diagnosed for sure without an MRI. It also has a distinct pathology from another rare disease called Wilson’s—the one that concerned copper—despite the similar symptoms, which is why I also needed to have that bloodwork done and have genetic testing to recognize the prospective genetic mutation it is yielded from.

Right now, there’s no cure for Fahr’s. All patients can do is manage their symptoms with prescriptions, counseling, and assisted care. My neurologist says that the life expectancy for patients has increased over the years due to technology and patent research; but knowing the likelihood of me passing this down, perhaps mentally and neurologically declining in a matter of years: I don’t see myself having children or committing myself too deeply in the overall long-term. Plus, this disease is neurodegenerative: which is a polysyllabic, maybe tactful way of saying “Your brain will only get worse.”

I cannot stress how important is not to ignore your symptoms or instincts, because there’s a good chance that something is legitimately underlying your concerns. Some things can be minor, maybe a matter of taking a load off or taking time to breathe. The reality is also that things can be major. If your symptoms persist, so do your concerns and complaints. That isn’t “normal.” Everybody gets sick. Everybody shows symptoms, but it isn’t “normal” to have symptoms that are patterned or progressively worth dismissing; especially, when those symptoms go untreated and intensify over time.

Talk to your doctor. Make them listen. If they don’t, find another if you can, even if you end up dealing mostly (or exclusively) with the ER and/or walk-in clinics. They’re not your official MD on file; but they’re still doctors and can administer, if not help you get treatment. They can write you prescriptions, notes, and [specialist] referrals; and they can also fill out insurance forms if your MD is being obtuse or dismissive.

My story is hardly unique however galling, and it is again one of privilege. I cannot begin to imagine how many marginalized peoples—more marginalized than I am—fare against similar, if not worse. The horrific histories of colonialism, imperialism, and white supremacy pervade our present in contemporary schemes of eurocentrism, patriarchy, colorism, and misogynoir which stage and sustain sorrow.

Likewise, these schemes discredit or destroy us should we avow our anguish. This applies to healthcare wherein patients like me are not only doubted or dismissed, but misdiagnosed or discharged. Patients like me can be lucky to afford alternatives, but patients worse off than me in respect to positionality can’t: the ones who aren’t high functioning, whose sickness can’t be sublimated to score scholarships or salaries [however modest] that keep them afloat; who aren’t as light, small, cis, or otherwise passing.

The institution is insidious and intent, because it endeavors to eschew us under some pretext of order or establishment. It feigns ignorance or innocence through propaganda of diversity and inclusivity, when its distinctions are discriminatory—which is why the same folks flounder as others flourish. It is no coincidence that popular culture regards sickness or disability as grounds for dismissal or disposal. Race and gender are interwoven in the eugenic esteems in that regard.

I still don’t know how this MD could intently dismiss my concerns for what has become a little over a decade; and I don’t know how he can so nonchalantly engage me moving forward. What I do know is what could’ve been: if I could’ve moderated my symptoms, I could’ve been healthier and happier had this MD taken my concerns seriously from the beginning; perhaps even afforded access to some resources and clinical support systems, instead of ER visits with wait times of hours upon hours and checkered prescriptions; all that triage, trial error.