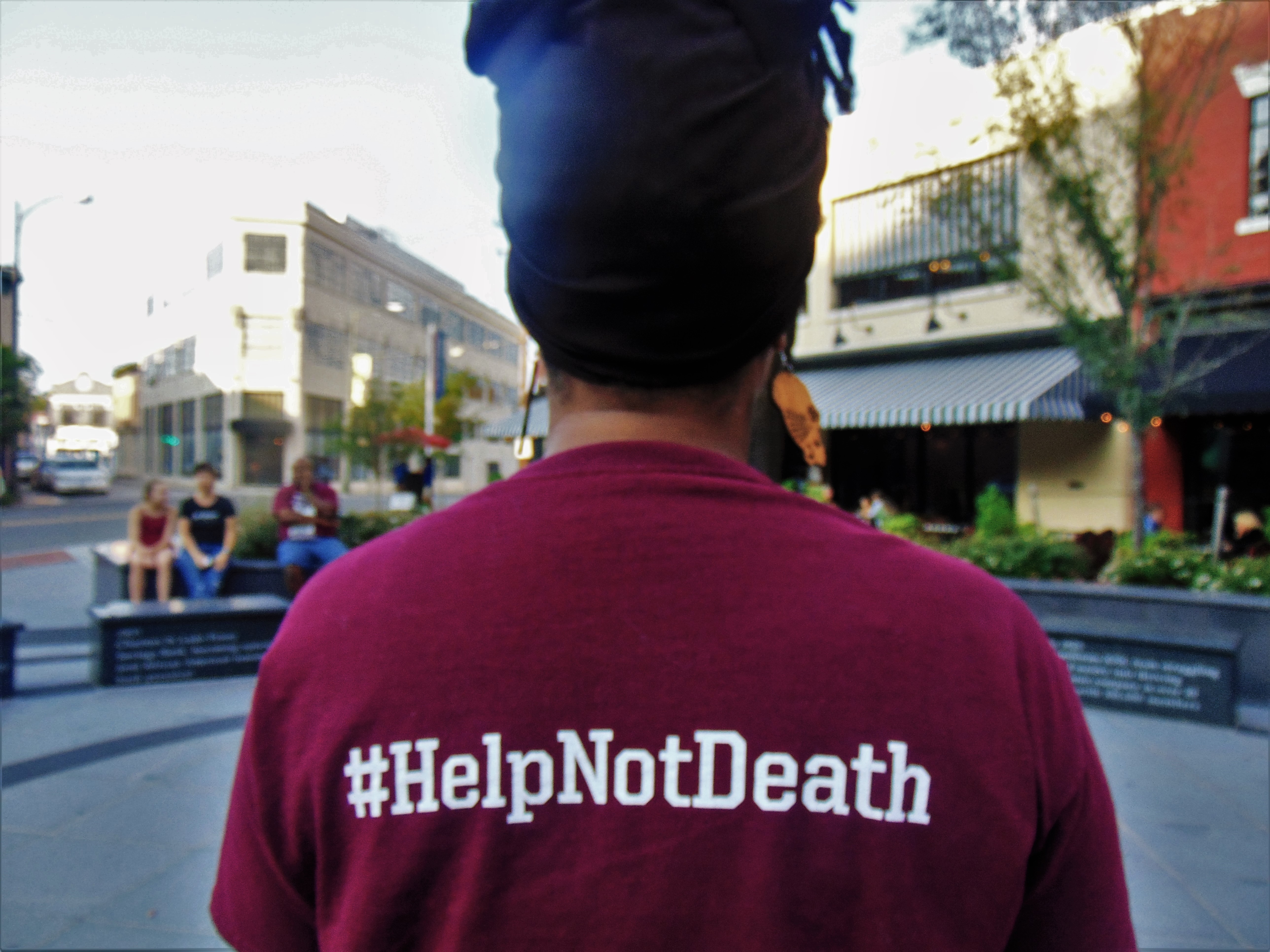 Last week, I met Princess Blanding at an art build for the upcoming National March For Justice and Reformation for Marcus-David Peters. I recently had a conversation with Blanding about demanding justice for her brother, Marcus-David Peters, who was murdered by the Richmond Police Department.

Stephanie Younger: What is the story behind the hashtag #HelpNotDeath?

Princess Blanding: A few days post Marcus being killed, I knew that I had to stand up and defend my brother. I had to clear his name, as my family and I knew that the behaviors observed were the opposite of who Marcus was. When hearing that Marcus was undressed and ran towards the highway, it became obvious that Marcus was clearly in distress and needed help to address whatever he was going through. Keeping these facts in mind, I made the statement publicly numerous times that Marcus needed, #HelpNotDeath. Being unarmed and Black or Brown can not be a death sentence. Being unarmed and going through a mental health crisis can not be a death sentence. We will continue to fight for Justice and Reformation while stressing the fact that unarmed people who are going through a confirmed or potential mental health crisis, need #HelpNotDeath.

How did the murder of Marcus-David Peters influence your perspective on police brutality?

Before Marcus was killed by a Richmond Police Officer, I remember very clearly continuously hearing of situations where police officers have unnecessarily and unjustly used excessive force to brutalize and kill individuals. I remember feeling sad, angry, and helpless all at once every time I would see these acts on the news or social media. I can remember saying how this was not right and wanting to do something to help stop it. I remember on May 14, 2018 when the death of a loved one at the hands of a police officer fell on my door steps. I remember going in and out of consciousness, those feelings that I felt when I heard about Sandra Bland, Eric Garner, Tamir Rice, Michael Brown and so many others unjustly killed at the hands of those sworn to protect and serve. I was no longer feeling the pain from a distance, I am now living through the pain. It became even clearer, that no matter how good of a person you are, how educated you are, how respectful you are, the great career that you have; being Black and Brown in America is a crime. The color of our skin determines in many cases how our encounters with the police will play out, too often we are harassed, brutalized, and even killed. Police brutality is a major systemic problem here in America, the only way that we will fix this problem is when we join together in unity and hold our elected officials and police departments accountable. The family and I do not have confidence that the Commonwealth Attorney, Michael Herring will make the right decision and indict the officer who unjustly killed Marcus. When our elected officials do not do right by the people who elected them into office, we the people understand that we have a lot of power and we will remove them from the very positions that we voted them into. None of us are free until all of us are free!

In what ways do you view the murder as a reflection of the historical treatment of Black people?

I do view the way that RPD, from the lowest level to the highest level has handled Marcus and this case as a reflection of the historical treatment of Black people. I often use the phrase “modern day slavery”, we as Black people are far from being “Free”. Progress has been made but we still have a long way to go. In my opinion, the Richmond Police Department did everything in their power to cover up the unjust killing of my brother Marcus-David Peters and to paint him as being the criminal and not the victim. It is also my opinion that they tried to gain the people’s support by intentionally putting out a false narrative and information in hope that the public would feel that Marcus deserved to be killed. The Richmond Police Department and City of Richmond demonized Marcus, hoping to prick fear in the Black community by setting an example with what happened to Marcus. The officer that killed Marcus was Black and had the audacity to make a statement after shooting Marcus multiple times, that state troopers may need to use more deadly force. The Black Chief of police made the statement, “Being Naked doesn’t take away the threat”. The Black Mayor who commended the Chief on the work that he has been doing surrounding this investigation has yet to take a strong stand/ position. The family does not have confidence that the Black Commonwealth Attorney will do right by Marcus and charge the officer who unjustly killed him. You have those Blacks who feel that education and a great career puts them on a higher level and social-economical standing than those who are not in the same position. I believe that sometimes this causes Blacks in position to forget where they came from and they find themselves not doing what is right for the people, but playing the political game to impress others and secure their comfortable positions. It is as if they feel a need to prove that they are not like the Blacks “beneath them”, they succumb to the racist system that has and still does control America. Not only are Blacks being harassed and killed by white officers at an alarming rate, we are also being harassed and killed by Black officers as well. There needs to be mandatory training in police departments nationwide on implicit biases. Being Black and Brown in America is a crime, We The People have a lot of power and we will unite to change this broken racist, judgmental, biased, UNJUST system.

What do Richmond’s politicians, elected officials and community members need to do to show up for the Black community in the face of state violence?

Richmond politicians, elected officials and community members need to step out of their comfort zone and take a strong stand against the unjust, inhuman treatment and killing of Black and Brown people. Silence is violence. As long as they do not use their power and influence to make the needed changes to bring state-sanctioned violence to an end and to hold police officers accountable, then they are just as guilty as the officers who pull the trigger. The family of Marcus-David Peters has put out several demands to include a Civilian Review Board (CRB) with subpoena power. Supporting the implementation of a CRB would show the Black community and RVA community in general that they are taking a stand against state-sanctioned violence and they are truly here to serve the people. The Commonwealth Attorney, Michael Herring, making the right decision, to charge the officer who unjustly killed Marcus-David Peters, will set the tone that Richmond stands for police accountability. Michael Herring needs to understand that if he does not charge the officer, we the people will vote him out of his position. The Justice and Reformation coalition is hosting a Justice and Reformation: Elected Officials and Police Department Accountability march to take place on October 13,2018. The presence/ support and participation of elected officials in this national march will show the RVA community that our city is standing up and fighting against state-sanctioned violence.

One of your demands for justice is the creation of a Marcus Alert as a response to a mental health crisis. How will the Marcus Alert be used?

How should mental illness in the Black community be addressed?

I would first say that there is a very negative stigma in the Black community regarding mental health. When a Black person is going through a mental health crisis and expresses that they may need some support and help, they are usually called things such as, “ crazy, psycho” and other negative names. We are oftentimes treated as outcasts. We are also encouraged to just pray for healing and not encouraged to pray and seek professional help if needed. For these reasons when many Black and Brown people are dealing with mental health issues, we keep it to ourselves and just try to “deal with it”. This can often times lead to what I call the “balloon effect” We keep holding it in, trying to deal with things on our own day after day, we continue to blow our fears, emotions, thoughts, concerns into a balloon as we are trying to hold it together, and one day that balloon is filled so much that it pops. At this point we see people experiencing a “Mental Health Crisis”. It is important to help the Black community know that it is OKAY to need help and to ask for help. It is important that we continue to educate the Black community and equip them with tools to use when someone discloses to them that they may be experiencing mental health concerns or if their behavior demonstrates that they are dealing with mental health concerns. It is important to know how to deal with these individuals and the resources that are available to provide a person going through a mental health situation with the proper support and resources. Nationwide regardless of nationality we need to put a lot of resources in breaking the mental health stigma. The brain is the only major organ that when it is not functioning properly we demonize people and treat them as an outcast. When your kidneys stop functioning properly we provide people with dialysis, when our pancreas is not functioning properly a person may need insulin treatment, when your heart stops functioning properly you may have bypass surgery. Why is it that when our brain is not functioning properly, we receive DEATH?